The first step in getting going with Dynamic Insertion is creating/configuring Audio Blocks. You can think of Audio Blocks as a collection of audio clips and rules for how they should be played.

To take a look at your Audio Blocks, select Dynamic Insertion from the main sidebar, and then click on the grey box for Audio Blocks.

On the Audio Blocks page, you'll find a list of your existing blocks. Note: When you opt-in to certain products that utilize Dynamic Insertion, RedCircle automatically creates the following default Audio Blocks on your account:

After that, you can add clips to your Audio Block. Currently, there are two types of clips you can add:

For instance, suppose you create the following Audio Block:

Note, only those that have an Account Plan, or those assigned to a Team Seat role, have the ability to create new audio blocks.

Setting the 'Play Style' and 'Play Up To' Options

You have a number of options you can change to control the playback of the audio when creating or editing an Audio Block.

The Play Up To option controls how many total clips play during the ad break. With this setting, you can make sure that you never play more clips than you want in a single ad break. If an audio clip has no content (e.g. you include a 'Cross Promotion' item but there's no active cross-promotion), then that item doesn't count against your 'Play Up To' total.

The Play Style controls the order in which the clips are played. There are currently 2 options:

Let's say you configure the Audio Block below: 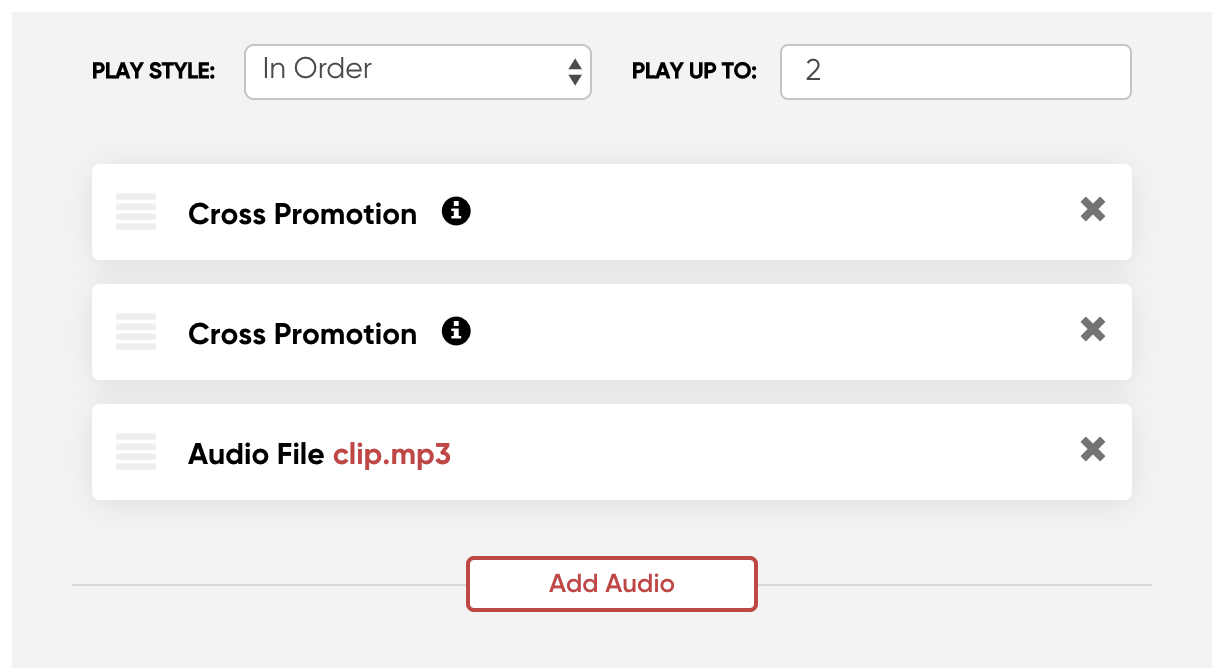 Only one clip is inserted into each episode using this audio block since it's configured for 'Random' style with a 'Play Up To' limit of one. Either the cross-promotion, clip.mp3, or clip2.mp3 fills the single slot at random.

Now that you've built an Audio Block, you need to have some 'Insertion Points' to assign to the block. Insertion Points control the exact point within your content where the audio is to be inserted. Read more here!