Learn how to set up and monitor host-read campaigns

The RedCircle Ad Platform (RAP) is your one-stop shop to monetize your show with advertising, all from right inside your RedCircle account. Check out this article to learn more about RAP and this article for information on getting started with RAP.

Host-Read Ads are pretty much what they sound like – you, the podcaster, read the ad to your audience. Either straight from the heart or off of paper! Our Ad Platform makes it easy for you to receive campaigns, upload audio, and earn those sweet advertisement CPMs.

So, keep reading on to learn more about Host-Read Ads on RedCircle!

Host-Read Ads can be found in the “Campaign Dashboard”, which is easily accessed by clicking on Ad Platform from the menu on the left side of the page. 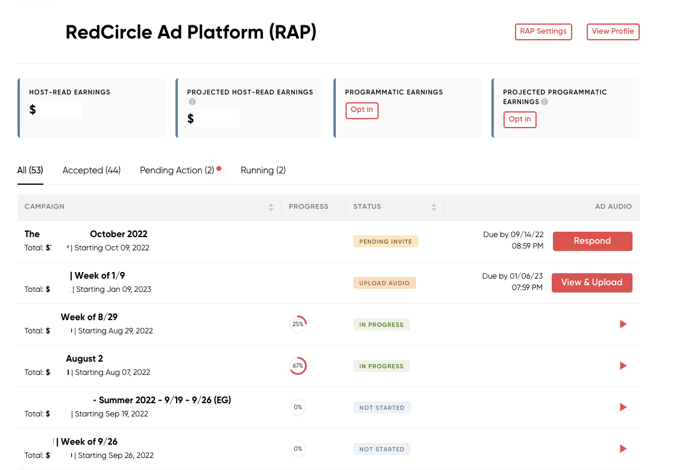 The Campaign Dashboard shows you all campaigns that you’ve ever received and their current statuses. Campaigns can be in one of 9 different stages:

You can change the view of the Dashboard to only see Accepted campaigns, campaigns with Pending Actions, or campaigns currently Running. Just click on the named tabs next to All to switch up the view.

Congratulations on scoring your first Host-Read Ad! We know you’ll do a fantastic job! But before you can dazzle both your audience and advertisers with your stellar ad-read, you need to first accept the campaign.

Host-Read campaigns can be more nuanced than you might think. Not to worry, though, we’re here to help you navigate through it like a pro. The first step is to review the campaign and decide if it’s the right fit for your show.

The Campaign Overview page gives you a detailed synopsis of the campaign including:

After reviewing the details of the campaign, you have the choice to either accept or decline the invite. If you decline the offer, then it’ll move from the Pending Invite stage to the Invite Declined stage. Keep in mind that you won’t be able to reverse that change.

If you decide to accept the campaign, then you’ll be taken to the next step of the process.

If the advertiser is interested in a specific set of time (say all of February), then the Release Schedule screen pops up. You’ll need to agree to the release schedule if you want to continue with the campaign. If the schedule doesn’t work for you, then you can close the pop-up and decline the offer.

If the advertiser isn’t sending you a sample of their product, then the Accept Campaign pop-up appears instead. Here you’ll see that the advertiser has 5 days before your ad audio is due to provide you with the script.

This is the last chance to change your mind and decline the offer. Accepting the offer means that you agree to all terms in the campaign details and release schedule (if the advertiser requests a specific timeframe.)

After confirming your acceptance, a pop-up screen appears with some next steps. You may see a different screen depending on whether or not the brand is providing you with a product sample. If no sample, then you’ll see a quick synopsis on when to expect the script, when you need to upload the audio, and how to upload the audio.

If there is a sample, then you’ll either see a screen with instructions on how to redeem the sample from their website, or just a confirmation that the sample will be mailed to your address on file. Both screens also show a breakdown of when to expect the script, when you need to upload the audio, and how to upload the audio.

The day of script arrival has come! It’s time to give it a read and record that stellar audio. Remember, you have up to 3 days before the ad campaign is set to start to upload the audio. Any later than 3 days before the campaign starts results in your invite expiring.

To view the script and/or upload the audio, navigate to the campaign’s page on your RAP Campaign Dashboard and click on the red View Script & Upload Audio button. You may also see a red dot on the Ad Audio tab of the campaign. This means that the script is ready and we’re waiting for you to upload the audio.

All of the necessary information including the script/talking points, promo code (if required), and any additional notes are present on the Upload & Submit Advertisement screen. All you need to do to upload is click the red Choose a file to upload button (just like for your episodes!)

You have the chance to listen to the audio right after uploading. Simply click the play button to give it a listen. If you’re satisfied with the ad read, then go ahead and click the red Submit button to save and send.

And that's it! The campaign is ready to go for launch!

The campaign runs a little differently depending on whether the advertiser selected all of your episodes or only ones within a specific time frame.

For campaigns spanning all episodes:

For these campaigns, the advertiser is buying certain positions (pre, mid, and/or post-roll) across all your episodes. As a reminder, when you create an episode, we automatically add “Default Ad Block” insertion points to your pre-roll, post-roll, and to your mid-roll in the middle of your episode at the 50% timestamp.

In order for the ad to successfully run on your show, it is very important that you do the following:

When the campaign starts, we dynamically insert your host-read ad audio for this campaign into the “Default Ad Block” insertion points, in the positions indicated by the brand, across your entire catalog. This ad automatically stops playing once it has hit a download threshold.

Important: Do not bake-in or edit in your ad read into your episode’s audio file. Our dynamic insertion technology inserts the ad for you.

For campaigns running on selected episodes:

The advertiser is buying on a specific position (pre, mid, OR post-roll) on specific future episodes. You need to publish new episodes following the release schedule for this campaign in order to avoid a missed spot. Please note: calendar weeks are Monday-Sunday Eastern time (EST).

You have the opportunity to configure your insertion points when you upload a new episode. As a reminder, we automatically add “Default Ad Block” insertion points to your pre-roll, post-roll, and to your mid-roll in the middle of your episode at the 50% timestamp.

Whatever position the brand is buying on your podcast, make sure the "Default Ad Block" insertion point in that position is at a timestamp that sounds natural for an ad break and doesn’t cut you off in the middle of a sentence!

Important: Do not bake-in or edit in your ad read into your episode’s audio file. Our dynamic insertion technology inserts the ad for you.

When should I expect to get paid for this ad?

Campaigns are always billed on the first day of the following month. So, if the ad ran in January, then the advertiser receives the invoice on February 1st. It typically takes advertisers about 90 days to complete the invoice. You can expect to receive payment shortly after the advertiser pays the invoice.

We send out notification emails as soon as you receive payment. Keep an eye on your inbox!

Why was my campaign paused?

This can happen for any number of reasons, but the most common is an issue with the ad read itself. This could range from the promo code being incorrect to a key talking point being missed.

You’ll always get a note from the brand letting you know why the ad was paused and what needs to be fixed. You can find this note on the Campaign Details page in your RAP Campaign Dashboard.

How do I swap the audio?

If you need to change the audio on the ad for whatever reason, simply navigate to the Campaign Details page to start the process.

If you’re swapping the audio to unpause your campaign, then you should see a red Replace Audio button on the page.

If your campaign is not paused but you need to switch the audio, then click on the 3 dots (...) on the audio track section and select Script & Replace Audio.

Check out our other articles for more information on RAP, earning money, and more!